FieldWorks was founded on March 19, 2001 by Laurie Moskowitz and Susan Blad Seldin in Washington, DC.

Prior to founding the firm, Laurie served as Director of the National Coordinated Campaign for the 2000 presidential election. She was also Director of Delegates for the Gore 2000 campaign. Laurie was Voter Contact Director for the Democratic National Committee during the 1998 election cycle and Deputy Director for Senator Carl Levin’s successful re-election campaign in 1996.

Susan served as Deputy Director of the DNC’s 2000 Coordinated Campaign before founding the firm. During the 1998 campaign cycle, she was the DNC’s Western States Political Director where she worked closely with elected officials, candidates and state parties to mobilize grassroots support using targeted statewide vote-by-mail and early vote programs. She developed the 1996 youth outreach programs for the reelection of President Clinton and Vice President Gore, and created and managed the 1992 student outreach program for the California Democratic Party, registering 60,000 students on college campuses.

After running the DNC’s 2000 Coordinated Campaign, for which they were widely credited with helping earn Al Gore the popular vote, Laurie and Susan shared a vision of a professional approach to field organizing and to building the premier grassroots organizing company for progressive organizations and Democratic campaigns around the country. And that is how FieldWorks was born.

In the first two years of its existence, FieldWorks played a decisive role in the election of Arizona Governor Janet Napolitano and the Democratic primary victory of a first-time candidate in the Texas gubernatorial campaign, in addition to running a number of successful projects for the Democratic National Committee and the Democratic Senatorial Campaign Committee, as well as the state Democratic parties in California and New York.

Our 2002 digital holiday card was a fun take on “yard sign wars“.

FieldWorks operated out of a row house in the Woodley Park neighborhood of Washington, DC. The basement and first floor of 2852 Connecticut Ave NW served as world headquarters for dozens of partners, vice presidents and program staff over the years.

Debbie Willhite joined the firm and became a partner in May 2003. Before joining FieldWorks, Debbie was Senior Vice President, Government Relations and Public Policy for the United States Postal Service. Prior to that, she served as Executive Director of the Denver Summit of the Eight and Co-Director of the 1997 Presidential Inaugural Committee.

Chris Gallaway joined the firm as Vice President in 2004. Chris was previously Executive Director of the Kansas Democratic Party and was in the middle of his first term as National President of the Young Democrats of America when he joined FieldWorks.

Our 2004 digital holiday card featured a couple of our interns “canvassing“.

Marie Therese Dominguez became the fourth partner in 2005. Prior to joining FieldWorks, Marie Therese spent eight years in the Clinton Administration in a variety of senior policy and management positions. She served at the White House as Special Assistant to the President for Personnel, the Department of Transportation as Deputy Chief of Staff to the FAA Administrator and the Pentagon as Deputy Assistant Secretary of the Army for Civil Works. 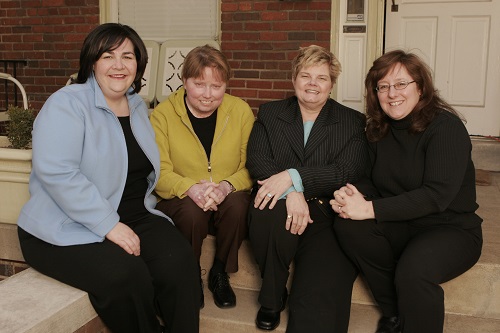 The first four partners on the porch of 2852 Connecticut Avenue.

Lew Granofsky joined the firm as Vice President in 2005. Before FieldWorks, Lew directed some of the most successful voter contact and fundraising canvasses in the country for numerous national labor and environmental organizations and local candidates.

Sadly, Susan passed away in 2006. She is survived by her husband David, her daughter Agnes, and the thousands of political organizers she inspired.

Marie Therese left the firm in 2006 and went on to hold senior positions at the United States Postal Service during the Obama administration and was confirmed by the U.S. Senate to serve as Administrator of the Pipeline and Hazardous Materials Safety Administration (PHMSA) at the U.S. Department of Transportation. She is currently Commissioner of the New York State Department of Transportation.

Debbie left the firm in 2007 and moved back home to Arkansas. She continued to work for the Democratic Party and progressive candidates. Additionally, Debbie served as Chief Operating Officer of the Arkansas Health Connector, the health insurance marketplace created to implement the Affordable Care Act in the state. In that role, Debbie helped to enroll more than 150,000 Arkansans in the program. She is currently a partner at Go Fight Win Group.

Dessari Langston started as a Canvass Director with FieldWorks in early 2009. Dessari holds a degree in engineering and has a background in marketing; she brought key skills and experience from those fields when she made a career change to join FieldWorks.

In 2010, Lew and Chris became partners and Laurie stepped away from the day-to-day operations of the firm.

Almost 10 years after founding the firm, Laurie left in 2011 and joined the One Campaign’s efforts to fight extreme poverty and preventable disease. She is currently a principal at LORE Strategies.

On November 12, 2012, an era ended as FieldWorks moved out of its decade-long home at 2852 Connecticut Ave. The building was bought by a developer and turned into atrocious condos. Nothing could replace that first office, so nothing has. FieldWorks central staff now work from their homes across the country.

Nathaniel Parks joined as a partner for the 2014 election cycle. Before FieldWorks, Parks specialized in the business of creating and utilizing voter files and spent a decade working with political data in more than 40 states. After departing FieldWorks, he expanded his footprint to include printing and technology services for campaigns and organizations as well as providing PPE during the COVID-19 pandemic. He is currently CEO of Campaign Technology Services.

In 2019, Dessari celebrated her 10th anniversary at the firm and became a partner, joining Lew and Chris as the three active partners.

In 2020 we did a little off the shelf JibJab “every bunny dance now” card for spring while we were shutting down for COVID-19. Obviously, the 2002 and 2004 holiday cards were precursors to the entire industry.

FieldWorks celebrates the 20th anniversary of its founding in 2021. In that time, FieldWorks has employed more than 50,000 people working for more than 500 clients in 42 states.

FieldWorks has helped to generate millions of phone calls, knocked on millions of doors, collected petition signatures from millions of citizens, and registered hundred of thousands of voters that have helped campaigns WIN!